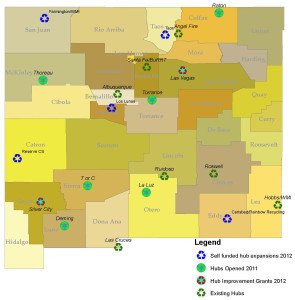 What is Hub & Spoke Recycling?

Successful recycling programs depend on efficient collection and basic processing of materials. This is achieved through the hub and spoke model, which works by creating regional recycling processing centers within larger communities that serve as “hubs” and encourages smaller communities or “spokes” to deliver their recyclables to these hubs. Recycling hubs will invest in or solicit grants for capital equipment and infrastructure needed to create and store high density bales of materials that remanufacturing markets require. Spoke communities will invest in or solicit grants for recycling collection trailers or containers. These mobile drop-off stations are easily transported to nearby recycling hubs. The hub and spoke system has been targeted as it provides the most efficient means of gathering and processing recyclables, from both a capital and operational cost perspective. Hub and spoke systems greatly reduce transportation requirements and increase overall efficiency of program operations.

In a nutshell, hub and spoke provides:

In September 2010, NMRC began work on a $2.8 million grant from the Department of Energy to develop rural recycling infrastructure throughout New Mexico. More than two-thirds of those monies were sub-awarded to eligible rural and underserved communities to develop and expand hub and spoke collection infrastructure. NMRC aims to share all the resources, templates, designs and specifications developed under this project so that other communities, regions and states can use the materials to develop their own recycling "hubs and spokes".

Want Assistance for Your NM Community?

While most urban areas of the state are well served by municipally or privately-operated processing facilities, the rural nature of the state leaves the majority of NM with little or no access to these services. This shortcoming has been clearly identified by NMRC’s Mapping Project, conducted under a U.S.D.A. Rural Utilities grant, where all solid waste facilities have been documented and mapped. This mapping effort illuminates under-served areas and demonstrates the “holes” in NM’s recycling processing capacity and the areas underserved with processing capacity.  Figure 1, developed in 2009, clearly identifies the need for expanded hub and spoke recycling within NM, as there are numerous locations within the state that do not have recycling processing facilities or the existing facility is at capacity and cannot accept more materials. Hubs were selected based upon how trash flowed, assessment of existing processing, 60-100 mile range and political and geographical boundaries. 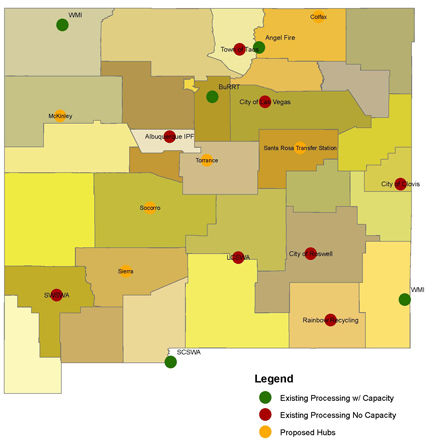 The hub and spoke model provides a simple and efficient solution to recycling collection and processing in rural communities. The hub and spoke approach has been proven in several regions of North America.  The best documented case comes from the Canadian Province of Ontario, where provincial government mandated the approach to resolve the inefficiencies created when each community attempted to provide their own independent processing capacity. In rural areas of Montana, Idaho and Wyoming a cooperative effort was formed on this model and has provided a stable recycling system for a broad rural area in these states. The State of Massachusetts took the hub and spoke principle a step further by building a central hub itself and contracting its operations to a private vendor. The Springfield Municipal Recycling Facility serves a dozen or more communities with processing services and has proven to be the cornerstone of recycling efforts in Massachusetts.

If each community is left to manage recycling independently economies of scale cannot be obtained and energy will, in fact, be wasted as these scattered efforts will not enjoy the efficiencies of centralized processing. Hub and spoke is not only an effective means of handling materials, it is by far the least resource intensive.

Hub and Spoke in NM Today

Due to numerous grants programs and several years of technical assistance to develop and expand hub communities, the hub and spoke map above has vastly changed! There are only two regions that currently do not offer the full range of traditional household recycling. And almost all of the hubs that did not have capacity have expanded in order to serve their region. 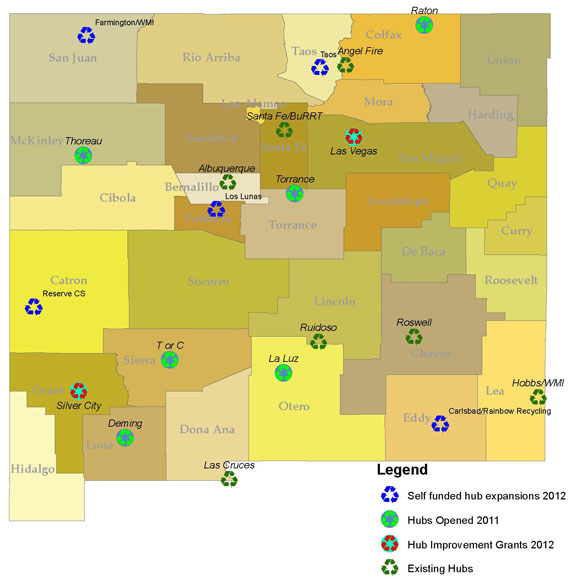 NMRC designed a recycling hub template suitable for a smaller community to economically host a regional processing facility. The infrastructure was aimed at simplicity and a relatively small initial investment. The location for a new regional hub is recommended to take place at an existing solid waste facility where existing staff can be utilized. New hubs start slow with the processing demands and build over time as more material arrives. Having cross-trained staff onsite allows for staffing flexibility. 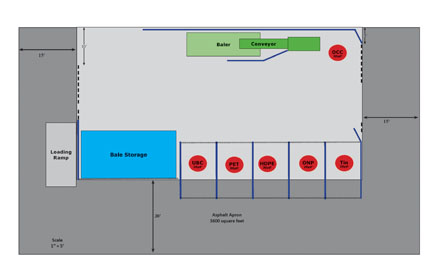 The hub is a simple, three-sided 3,000 square foot (40' x 75') building designed with clear skylights to avoid any lighting needs, 2 man-doors and 2 roll-doors. The open-side of the building is designed to be high enough to tip roll-off trucks into the bunker storage system. Each bunker can hold one bale worth of material. So when it's full, it's time to bale. Cardboard should be directly tipped into the baler and processed immediately.

The three-sided building was located so that the open side faced away from prevailing winds. There is no heating or cooling included in these buildings, running water nor offices or storage rooms. It is a simple structure made for processing recycling and that's it. The asphalt apron is important in order to control dust and to allow tipping of materials before pushing them into storage bunkers.

Lessons Learned: Planning for additional storage of both loose and baled materials is important - consider designing a larger building. If you must compile a full load of one commodity before marketing, plan for storage either in the building or in an empty semi-trailer nearby.

Horizontal Baler with In-Pit Conveyor
NMRC recommended two types of horizontal baler for the new hubs. These were both entry-level horizontal, manual tie systems available on the federal GSA purchasing website. One of the brands was chosen because it had an add-on three-phase electricity converter. We found that some locations did not have three-phase power on site, and to bring in new lines was quite expensive. There are many ways one can convey the materials into the baler and the in-pit system was selected in order to keep workloads and handling time down. We figured pushing material into a pit was simpler and cleaner than lifting material into the air. On the design template, a black line running around the front and around back are push walls. They prevent heavy equipment from bumping the baler, and ensure material ends up only in the pit and not everywhere else. These can be made locally by a welder. New baler recipients received two trainings on baler operation, one from the installer and another training from NMRC. ISRI's Baler Safety video was then left on hand for future trainings. Balers are dangerous and safety must be put first.

Every hub needs a way to push the material from storage bunker into the baler, to lift finished bales into the storage area, load trucks with finished product and in some cases to un-load portable recycling trailers. The goal of this recycling hub is efficiency in the sense of reducing the number of times the material must be handled. All materials are sorted by the citizen into divided containers. Baler staff provide a visual level of quality control while loading the baler, but are not expected to hand-sort materials. Safe operation training of the fork lift or skid steer should be provided.

Portable Loading Yard Ramp
For many reasons, this program found that a portable metal loading dock made the most sense rather than adding this feature to the building or constructing a permanent dock. Many hub sites have varying degrees of level and the portable dock also provides flexibility in truck loading. Another factor is that the ramp is economically priced. 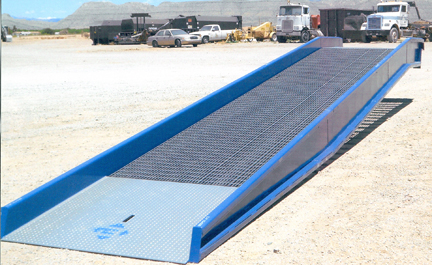 Bunker Storage for Recyclables
This system can be done in many ways to provide holding areas for the loose recyclables. They are designed to be placed on the open-side of the structure so that the trailer or roll-off can tip directly into the compartments. They can even be used as a public drop-off area if needed. The hub design called for donated Department of Transportation jersey barriers that were dented and not useful any longer for road projects. Chain link fencing was then added on top of the barriers to provide additional storage space.

Sample Hub Project Budgets
This is an example of the final budget for one of the hubs as designed above. Each of the three hubs varied as the baler with the converter cost more, the structure cost was affected by local costs and how much in-kind each grantee was able to provide and that left the amount to spend on collection equipment as the final variable and the last item purchased once all other items were in place and final costs were known.

The following budget is an example of the New Mexico Environment Department's "Balers and Trailers" grant program also funded via Department of Energy funding. This program utilized either an existing city-owned empty warehouse or buildings at landfills or transfer stations. Each awardee received $150,000 to launch their hub.

Collecting recyclables in the rural environment requires planning. Important considerations include drop-off location, type of equipment, switch-out needs and which materials to collect.

The following table reviews these considerations:

Roll-Off Containers
Roll-off collection equipment is recommended when a roll-off truck is owned. NMRC has written a generic bid document that can be used to procure a set of collection equipment. One for cardboard and then another divided container for sorted materials. 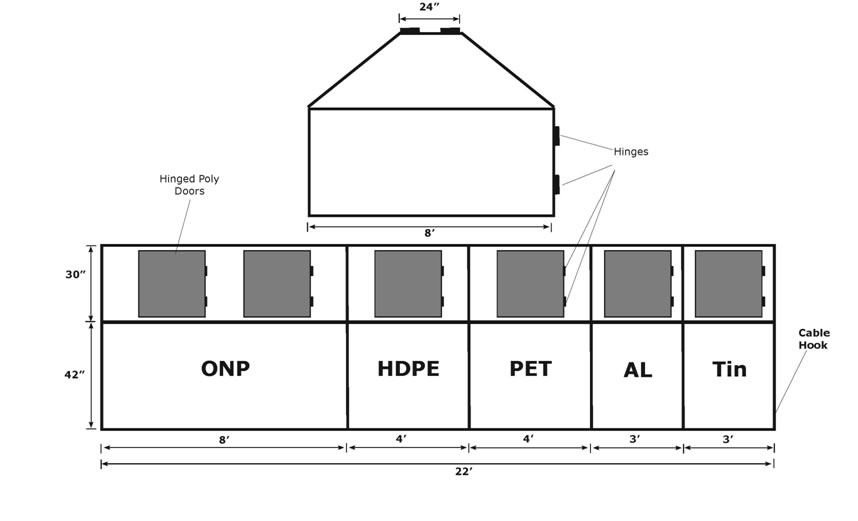 Recycling Trailers
There are two routes a community can take to using trailers designed to be hauled by a regular pick-up truck. You can have a simple wire-fencing type trailer available for each of your commodities and haul them to the hub when each one gets full. This may be practical for closely located spoke drop-off sites. For spokes sites of any distance, two recycling collection containers are recommended. Again, one for cardboard only and another divided container for sorted materials. You can configure available bins so that two of the bins may be used for the most commonly collected material, be it mixed paper of plastic #2 bottles. Whichever fills up faster. We recommend using signage that can be bolted on and off in the case that you need to experiment with number of divided bins per material. The goal is to not haul empty air, but mostly full bins of each material. To locate portable recycling trailer options, we recommend using Google. 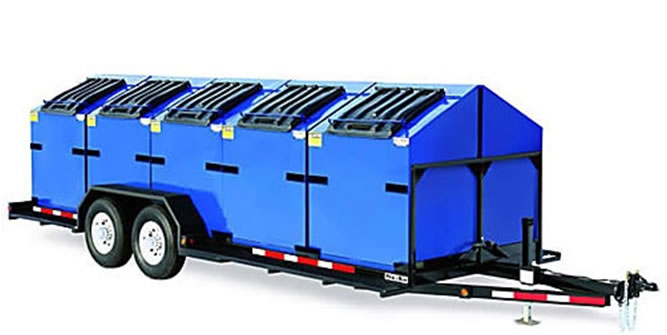 Recycling Spoke Grant
$385,060 Awarded April 2011. This program provided spoke collection equipment. Communities recevied varying award amounts and either purchased roll-off containers or trailers depending on existing equipment and distance to hub. For each site, it was recommended to place one container solely for cardboard and another multi-divider container for sorted materials. All were recommended to collect cardboard, mixed paper, aluminum cans, steel/tin cans, plastic #1 bottles and plastic #2 bottles.