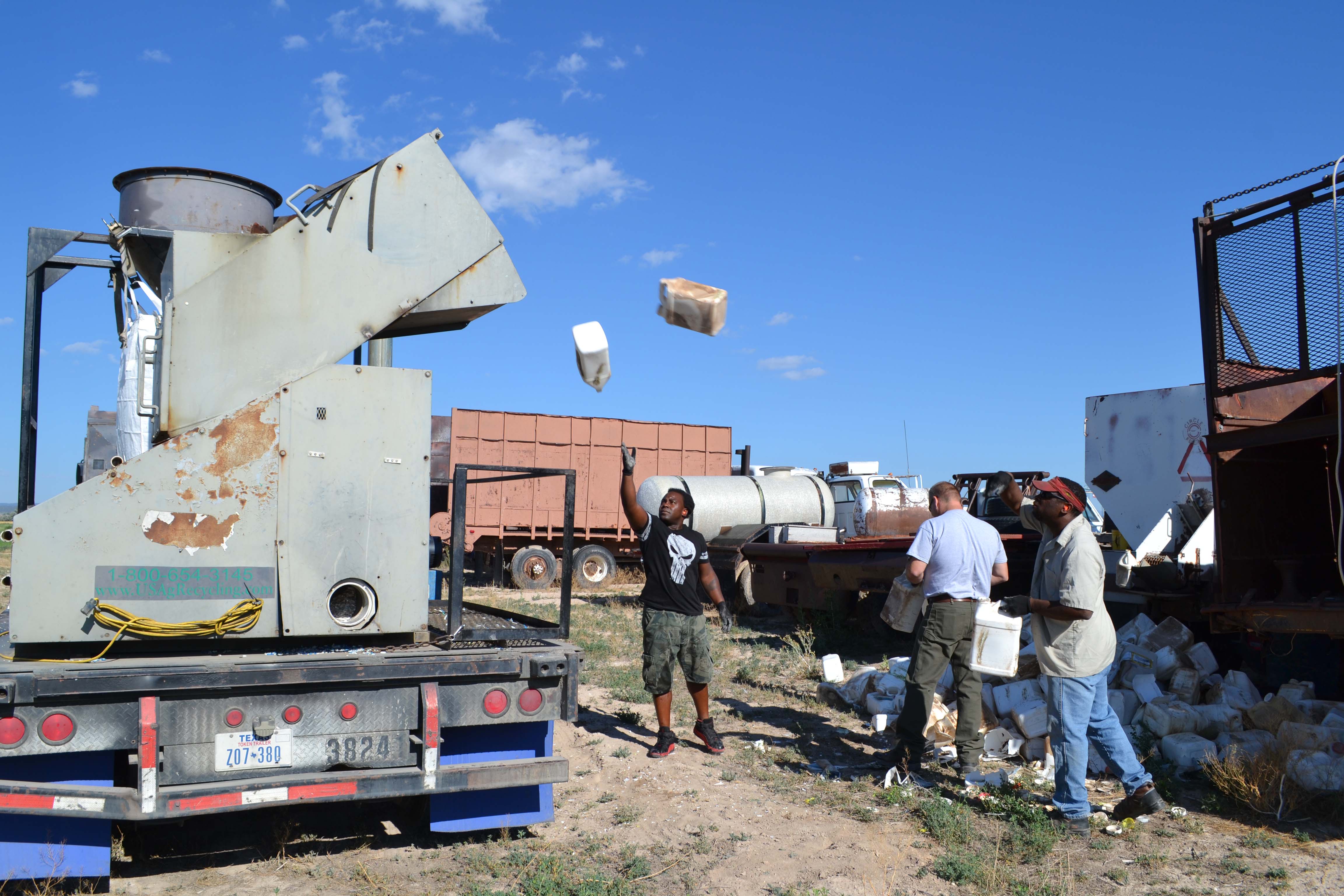 NMRC on KRQE-13 - How to Recycle your Christmas Trees
NMRC on KRQE - December 29, 2017. Learn more HERE and see the full story HERE

NMRC Works to Increase Recycling to 50%
February 3, 2015 - In the 2014 legislative session, legislators passed a memorial (HM51) sponsored by Representative Jeff Steinborn to develop strategies and policy in order to reach a state goal of a 50% solid waste diversion rate. The New Mexico Recycling Coalition (NMRC), in partnership with the New Mexico Environment Department: Solid Waste Bureau (NMED), led the charge with initial research and stakeholder input to help guide the process. More

NMRC Announces Food Waste Management Best Practices Guide
November 11, 2015 – In an effort to bring greater awareness around the subject of food waste and to provide resources to food-handling entities so they may wisely manage this material for reduction, donation, animal feed and for composting, the New Mexico Recycling Coalition (NMRC) has compiled best practices for these entities to use to increase the diversion of this material. The guide, “Managing Food Waste in New Mexico” is available online at www.recyclenewmexico.com/foodwaste.htm, along with other links and resources. Print copies are available as well upon request. More

NMRC Receives USDA Grant to "Grow Recycling Businesses" in NM
September 9, 2014 – The US Department of Agriculture (USDA) Rural Development program awarded $30,000 to the New Mexico Recycling Coalition (NMRC) as part of the Rural Business Enterprise Grant (RBEG) program. The “Growing Recycling Businesses in New Mexico” project will launch in September 2014 and will develop and support the growth of recycling-related businesses that manage or utilize locally generated recyclable materials. more

NMRC Launches ZOMBIE Advertising Campaign to Get New Mexicans to Recycle
June 17, 2014 – A new statewide media campaign that includes television, radio and social media advertisements encourages New Mexicans to “Recycle to Restore” by capitalizing on everyone’s favorite ghoul…..zombies!  It’s a clear choice:  You can be a mind-less zombie that doesn’t recycle or you can do your part by recycling. more

NMRC Awards Almost $20,000 in Grant Funds
May 22, 2014 – As part of its plan to work with local businesses to promote and increase food waste diversion, The New Mexico Recycling Coalition (NMRC) awarded $18,750 to three entities working to combat food waste in New Mexico. more

What Did Your Stimulus Funds Do for Recycling in NM?
September 16, 2013 –Over the past three years New Mexico has benefited from two pools of American Recovery and Reinvestment Act (ARRA) funds to improve recycling in the Land of Enchantment.  In August of 2013 the New Mexico Recycling Coalition (NMRC) completed a 3 year-long $2.8 million dollar rural and underserved recycling project funded through the Department of Energy’s American Recovery and Reinvestment Act Energy Efficiency and Conservation Block Grant (EECBG) program.  The state NM Environment Department also received similar federal stimulus funds in 2010. more

NMRC Announces 2013 Recycler of the Year
June 13, 2013 – Since 2004, the New Mexico Recycling Coalition has annually recognized a Recycler of the Year for working tirelessly to boost recycling in their communities.  The 2013 winner is Leonard Carrillo of Truth or Consequences. more

NMRC Receives Grant to Provide Scholarships to Professional Training
May 1, 2013 – What better way to celebrate International Workers’ Day than to register for a professional development training opportunity and receive a scholarship to cover the registration costs?  The New Mexico Recycling Coalition (NMRC) is pleased to announce that the organization has secured a $5000 grant from Keep America Beautiful and Lowe’s stores to help develop course content for two day-long professional trainings, as well as provide scholarships for attendees to attend these trainings.  more

NM is One of the First States to Offer National Certification as a Sustainable Resource Manager
April 22, 2013 – Ever wondered what the difference is between upcycling and downcycling? How would you classify recycling an aluminum can back into an aluminum can? What about making a house out of decommissioned shipping containers? These answers and many more will be revealed at a nationally certified training offered by the New Mexico Recycling Coalition.  more

Creating NM Jobs in the Recycling Industry
March, 2013 – See the article authored by NMRC's Executive Director, English Bird, and published in the March edition of the Green Fire Times here

NM Recycling Industry Poised to Add 5,000 New Jobs
January 22, 2013 –Many people associate recycling as something that is good for the environment.  But, not many realize the number of jobs created and what a significant economic driver the recycling industry plays in our state and country. In fact, nationally the recycling industry represents more jobs than the car manufacturing industry. A general rule of thumb is that for every landfill job there could be 10 recycling jobs for that same amount of material handled.  The recycling industry is a $236 billion industry compared to the $45 billion waste industry. more

Simple Steps to Put the "Green" Back in the Holidays
December 10, 2012 – Did you know that Americans produce 25% more waste between Thanksgiving and New Year’s Day? That means we’re adding one million more tons to the landfill in the span of a month (EPA). "Greening the holidays" began as a grass-roots movement, but it practically has turned into an industry.  There’s a reason the topic gets so much attention. Many of us yearn for healthier, more meaningful, less expensive and less wasteful holidays. Thankfully, you can start off your holiday season on a green foot by making a few small changes. more

Free Business Recycling Trainings Offered Throughout New Mexico
September 4, 2012 – Members of the business community are encouraged to attend FREE trainings aimed at assisting businesses to reduce their waste, cut back costs and to start or expand their recycling. The NMRC, the NM Green Chamber of Commerce, the NMSU Institute for Energy and the Environment and the NM Environment Department's Green Zia Environmental Leadership Program have joined forces to launch an outreach campaign to assist businesses to start or expand their recycling programs. more

Get Recognized for Your Business Recycling Efforts
September 1, 2012 -- Does your business reduce, reuse and recycle? If so, get recognized by the New Mexico Green Chamber in the first annual "NM Businesses Recycle" recognition program.  The program, in partnership with NMRC, will roll out in Albuquerque, Las Cruces, Silver City, Taos and Santa Fe with events planned around America Recycles Day on November 15th. more

Business Recycling Partnership Launched
May 29, 2012 - A new partnership has been created in order to expand business recycling programs around the state. The NM Recycling Coalition, the NM Green Chamber of Commerce, the NMSU Institute for Energy and the Environment and the NM Environment Department Green Zia Environmental Leadership Program have joined forces to launch an outreach campaign to assist businesses to start or expand their recycling programs. more

Recycling Opportunities Expand for Deming/Luna County
May 18, 2012 - The City of Deming will be celebrating the grand opening of their new regional recycling center located at 5470 Highway 549, on Thursday, May 31st at 1:30 PM.  This site will accept the following traditional household and business recycling items: cardboard, office paper, newspapers, junk mail, catalogs and magazines, aluminum and tin cans, and plastic bottles #1 and #2.  Following the grand opening, citizens will be able to leave their clean, sorted recycling at three more convenient recycling drop-off centers in Deming. more

Recycling Cooperative Launched
April 25, 2012 -The NMRC made its first sale of recyclable materials via the R3 (Rural Recycling Resources) Marketing Co-operative. Based on the farm co-operative model, the recycled material co-op aims to bring the best value to smaller community recycling programs. more

Valuable Recyclables in NM Landfills
March 7, 2012 - In 2010, New Mexicans buried $168 million worth of valuable material in landfills instead of recycling it. "The NM Landfill Rate Analysis" report found that, based on 29 reporting landfills in the state, the average cost to dispose of solid waste materials is $31.29 per ton. Using that average rate, it is estimated New Mexicans spent $51 million to bury $168 million worth of recyclable material. more

Recycling Access Doubles in New Mexico
February 14, 2012 - New Mexicans have significantly more locations to recycle around the state, especially in rural areas, with an increase of 81% of access to recycling. In the last 4 years, more than 83 drop-off recycling locations have been added by municipalities around the state. more